If you use large datasets (transcriptomes, whole genome sequencing, proteomes), sooner or later you will stumble across something called Principal Components Analysis (PCA). PCA is a dimensionality reduction, a family that encompasses many techniques that do just that: reduce the dimensionality.

But what does that mean? What are dimensions and why would we want to reduce their number?
How about we deal with these questions through an example?

The problematic
Say we have a hypothetical transcriptome, of a very primitive species, that has a total of 3 genes in its genome. Some of these individuals were treated with some drug and you are observing the changes in gene expression. If we plot all possible combinations of gene expressions we get the following set of graphs. General note: dimensions we refer to are here just a fancy word for genes. 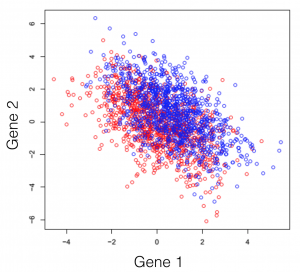 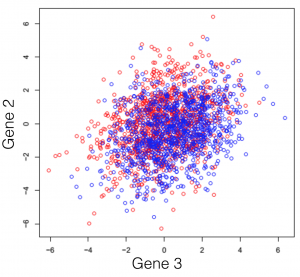 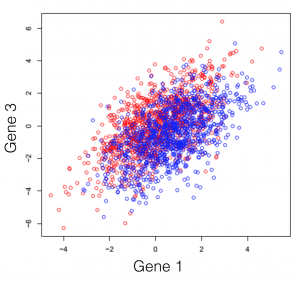 And here we see that there is a trend, but it seems to be distributed over the organism’s 3 genes and impossible to extract. This trend, although visible to the naked eye, can be distilled from the data, using a dimensionality reduction technique. Reducing dimensions doesn’t mean discarding some and keeping others. This family of methods attempts to remove redundancies, by creating a new dimension set, that explains better the observed samples in the dataset. In the following post (and others to come), I will provide an intuitive explanation of what each dimensionality reduction does.

Specifically for the PCA, the point is to create a new system of coordinates that does its best to explain the variance of the samples. In other words, the PCA will look for one direction in the dataset, that separates the most the samples. Then, it will look for another dimension, the second “most separating one”.

Sometimes PCA is referred to as a rotation. The rotation is done in the dataset space, to find that first dimension that separates best the samples. You will notice in the gif below (click the button to see the animation), that after a rotation, the two groups from our fictive dataset can be easily separated.

About the Author: Assya

A biochemist turned bioinformatician (Masters in progress), I like statistics and machine learning, efficient programs and good coffee.